The next pictures show the milling machine general character: 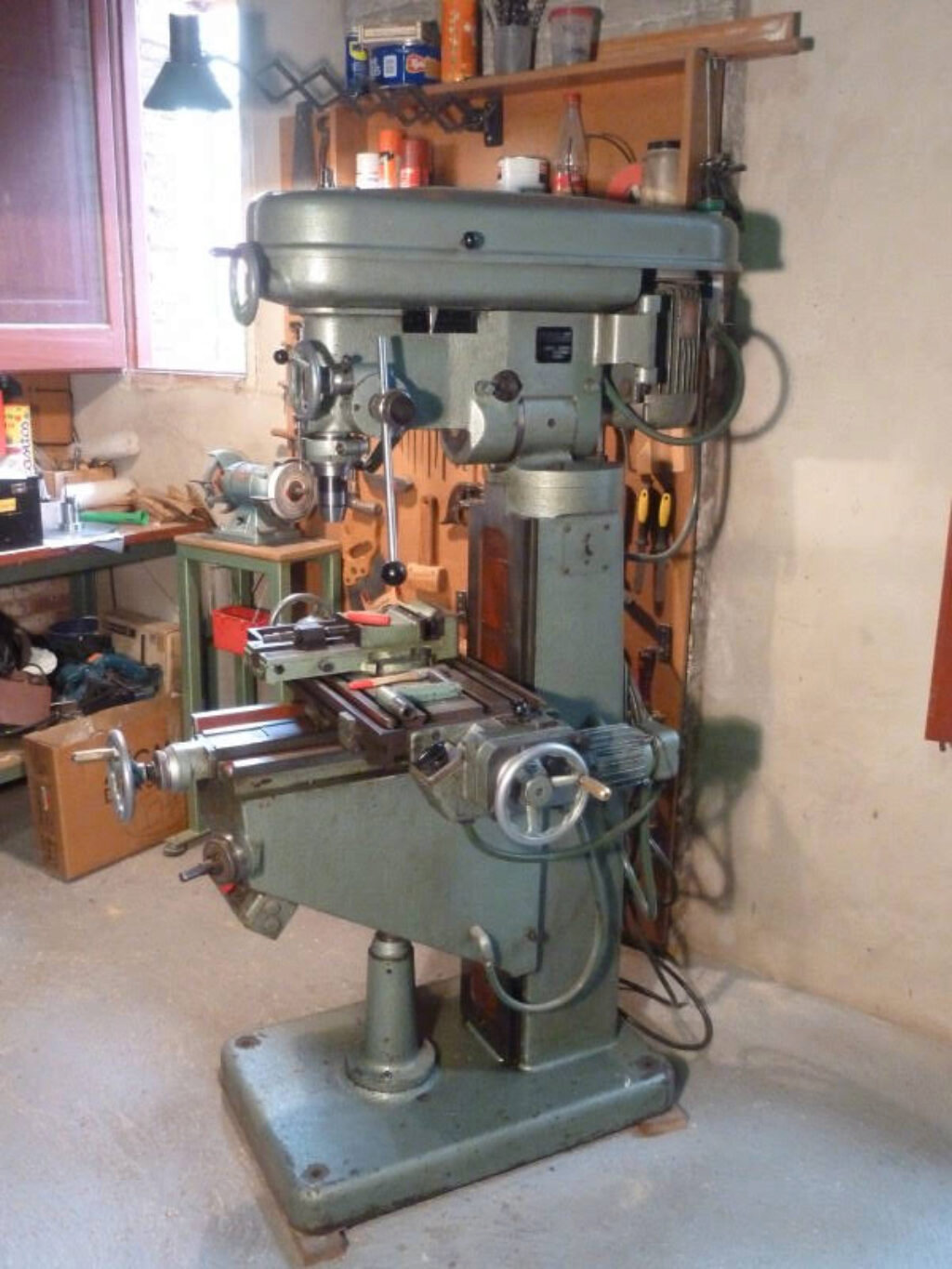 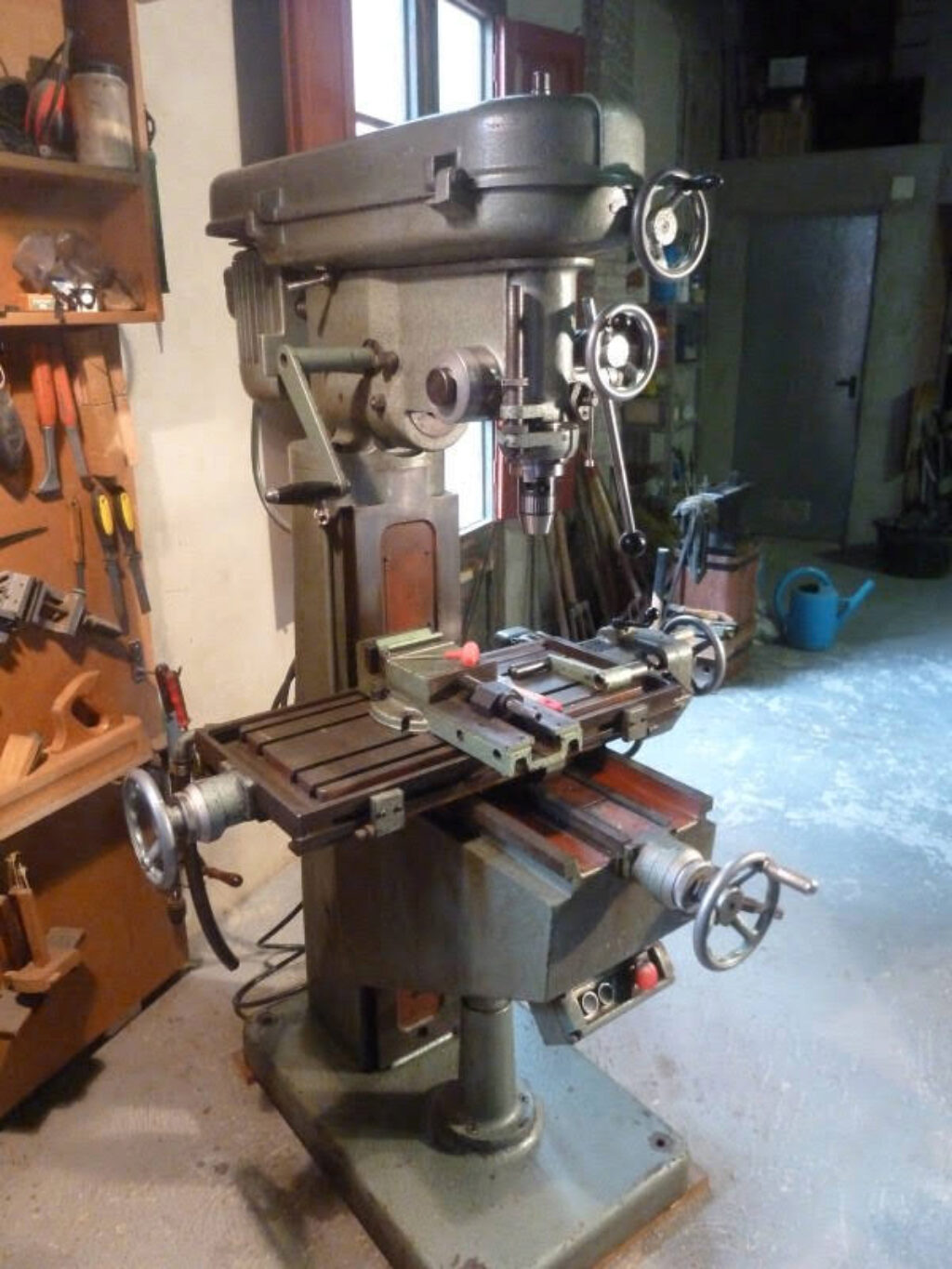 This is its identification plate: 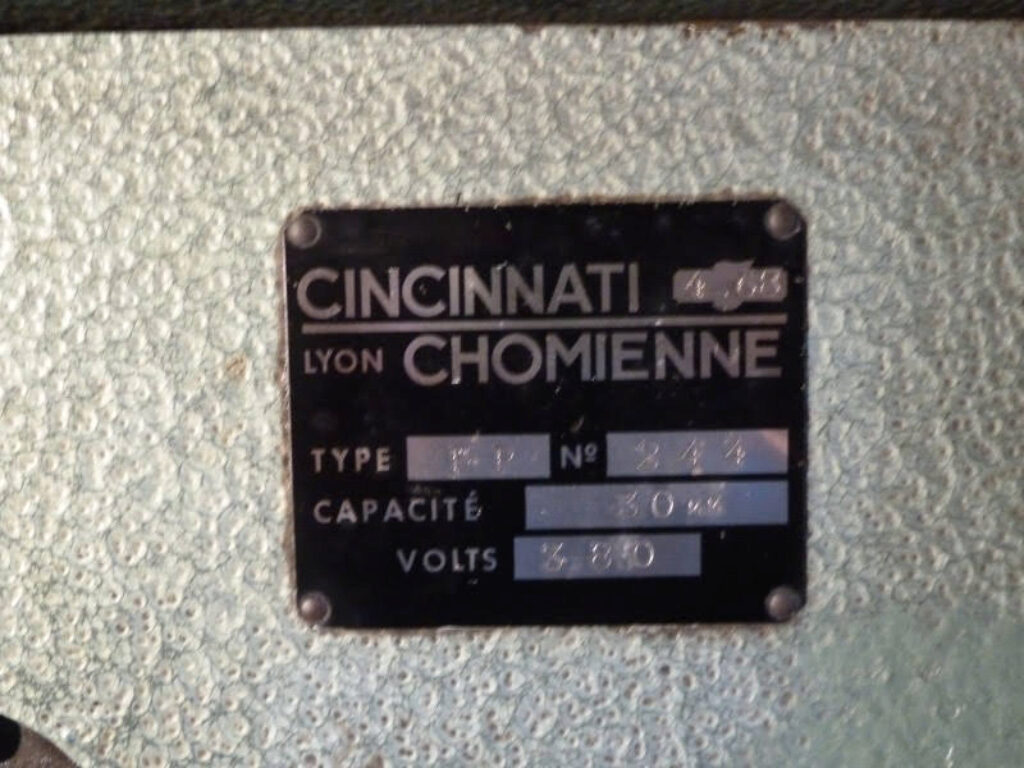 And this are the main dimensions as provided by an original brochure:

As you can see, it is very generous on its working lengths. It should be emphasized the very long Z travel!.

Additionally, these are the most salient characteristics:

The spindle is directly driven by a belt variator. There is no gearing involved. Thus, it is a very silent machine even at high speeds. The variator can be used in two range of speeds by changing the belts appropiately. The intermediate pulley moves back and forth by the action of a handle in the front of the machine and, at the same time, an indicator moves over a plate showing the approximate rpm’s of the spindle.

Following there are a couple of pictures of the spindle drive system. 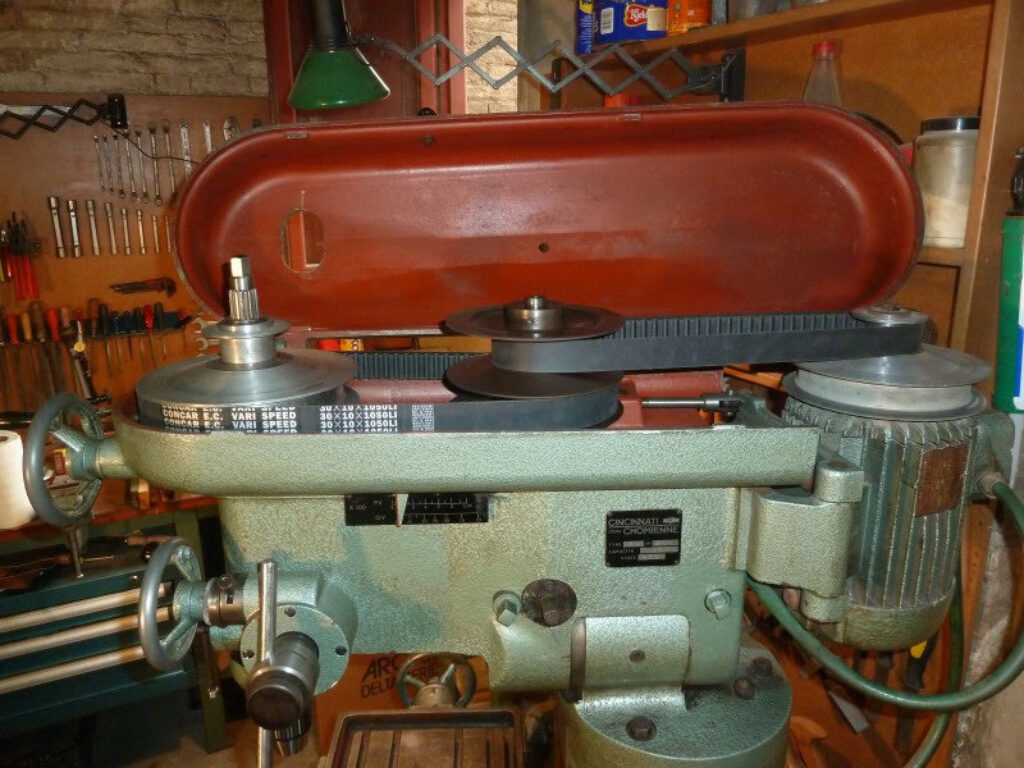 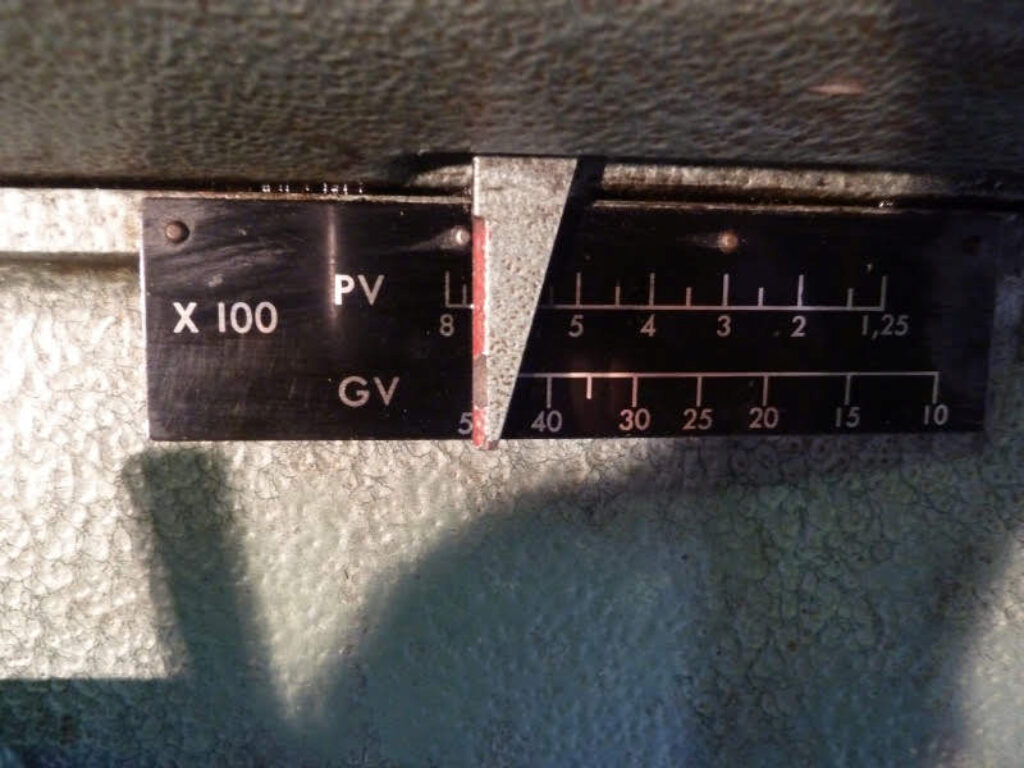 Note that belts were replaced recently and they are new. The range of speeds spans from 125 to 5000 rpm.

The machine head has a quill mechanism that allows for vertical travel of about 120mm. Note that most milling machines of this size have a quill travel, if any, of about 60mm. This is the case for Sixis 103, Schaublin 13 or Deckel FP1. The quill can be locked in any position by a clamp. Also, there is a usual depth max and min stops. The picture below shows the quill at maximum extension. Observe that the inferior depth stop includes an o-ring that avoids the quill to hit the bracket when returning because of the spring. 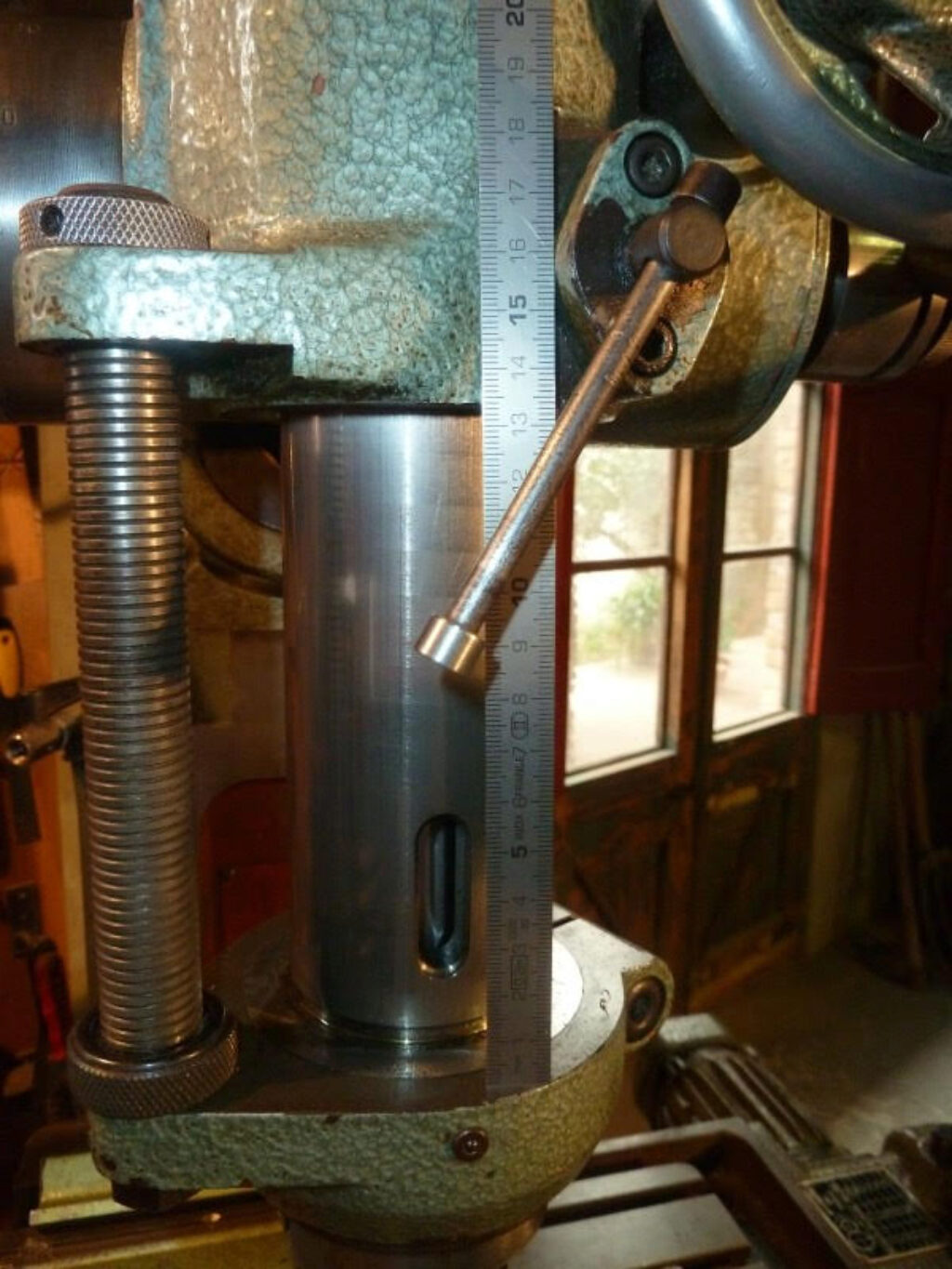 The quill can be actuated by two mechanisms. The first is an ordinary feed handle that directly actuates on the pinion and rack usual assembly. This mechanism allows for a rapid but controlled descent of the spindle and it is used to drilling like operations.

In the second one the pinion is rotated by a worm drive actuated through a hand wheel. This gives a much more slow movement suitable for boring like operations. This second mechanism can be engaged by rotating the eccentric suport of the worm until no play is appreciated. The hand wheel have a measuring drum graduated in 0.02mm. The following picture shows ths slow mechanism. 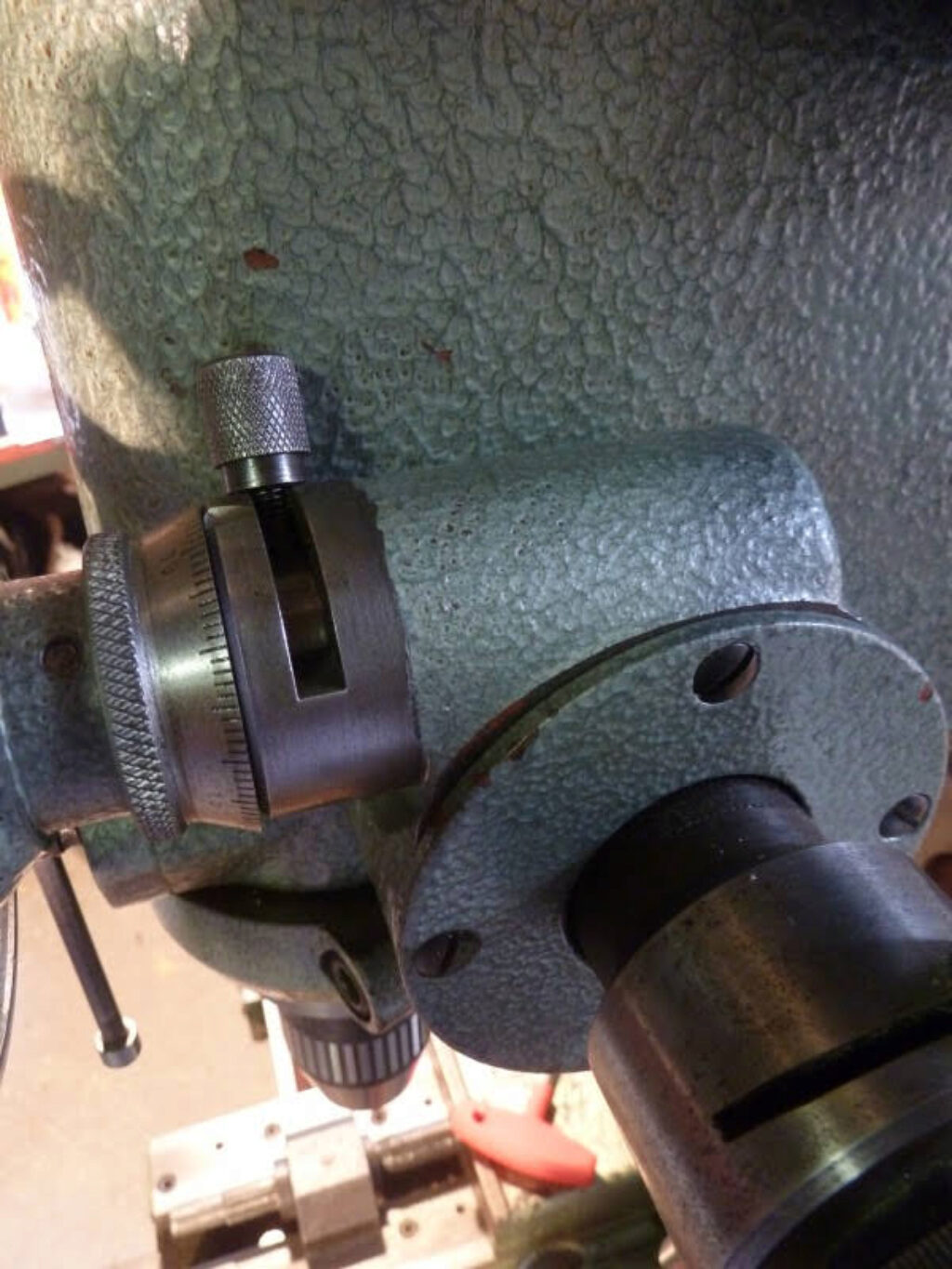 The shaft of the pinion also contains, enclosed in a box, a spring to return the quill to its neutral position. This box is graduated in its exterior and it allows  to read in a Vernier scale to a resolution of 0.1 mm as it can be seen in the picture below. This is a really useful measuring device. 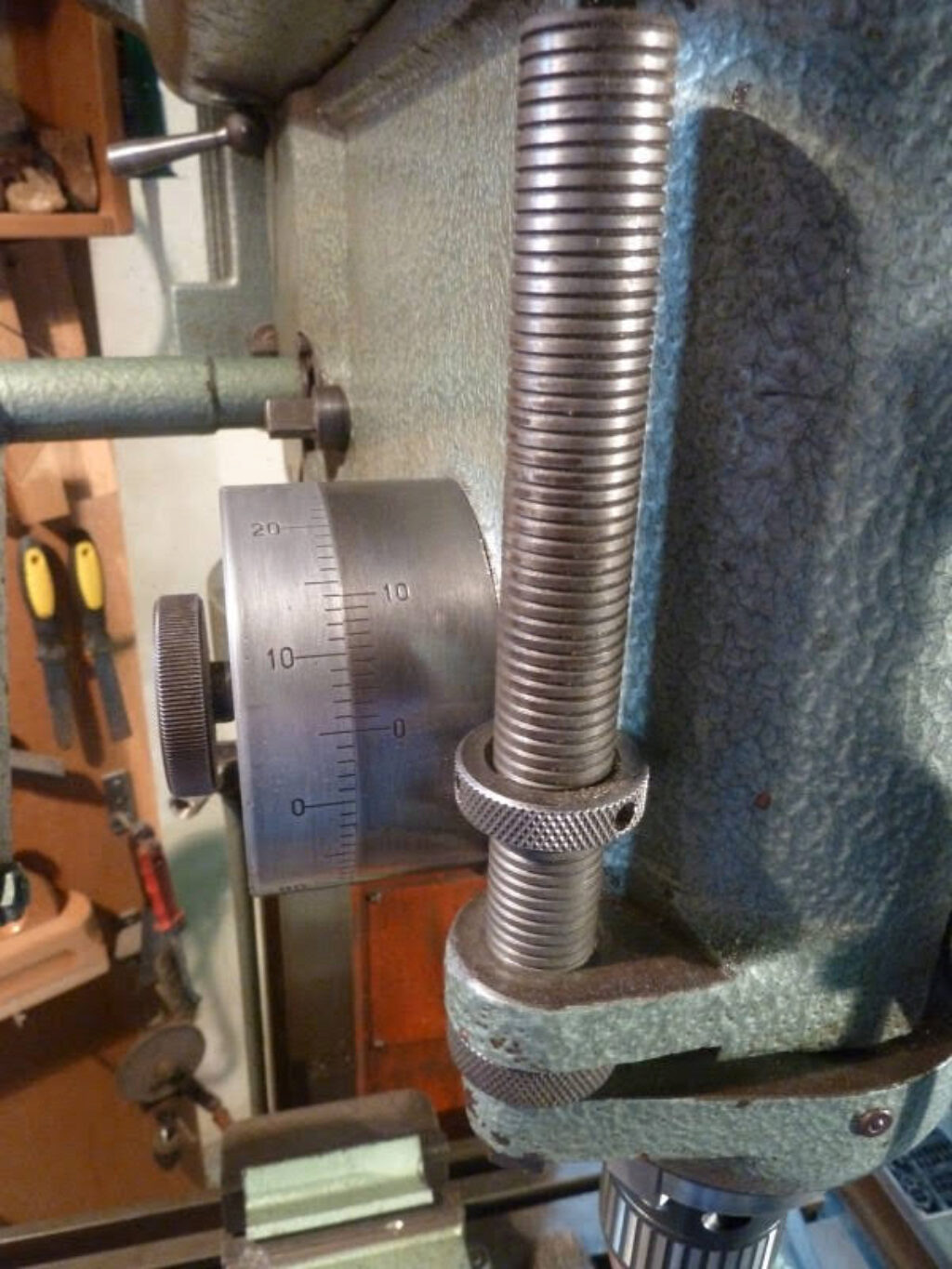 The X axe travel of this machine can be feed by an automatic mechanism. It is driven by an autonomous small motor that can be started in both directions through a switch next to the table. The traveling speed is modified by replacing a couple of gears enclosed in a box. Each pair of gears can be reversed and thus three pairs of gears result in six traveling speeds as shown in the corresponding plate. 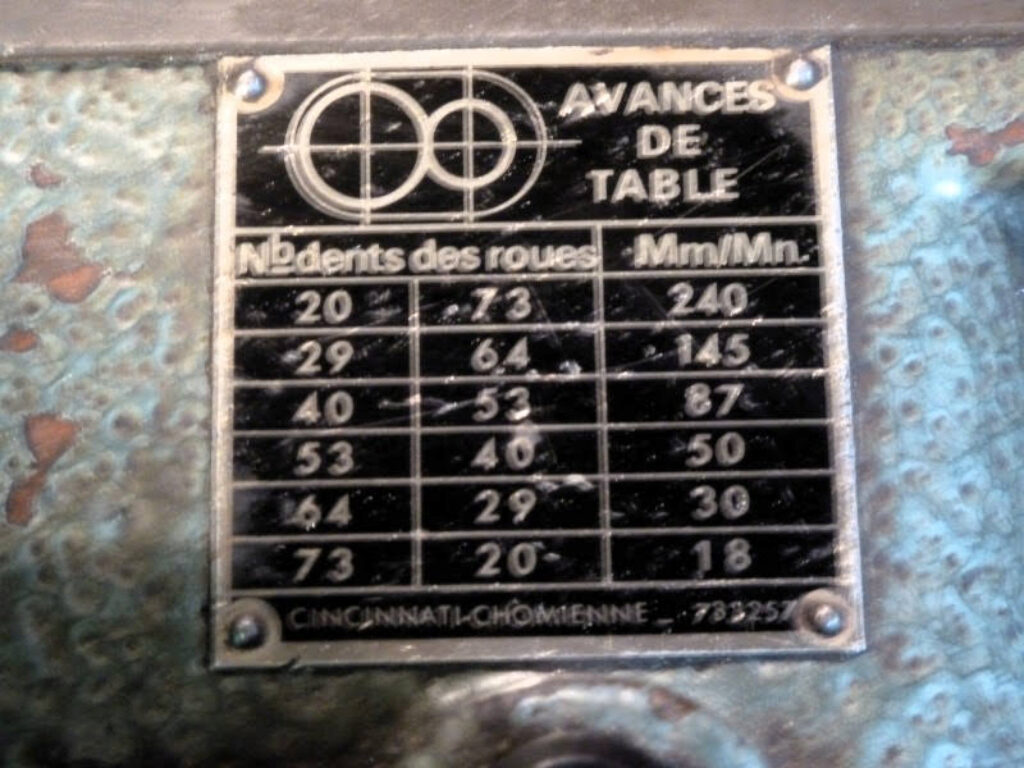 Unfortunately the machine was arrived with only two gears: 73 and 20. With this pair of gears, only the maximum and the minimum traveling speed can be achieved. What follows are some pictures of the advance mechanism. The last one shows the gearbox open. Note that travel speed is set at the lowest velocity. 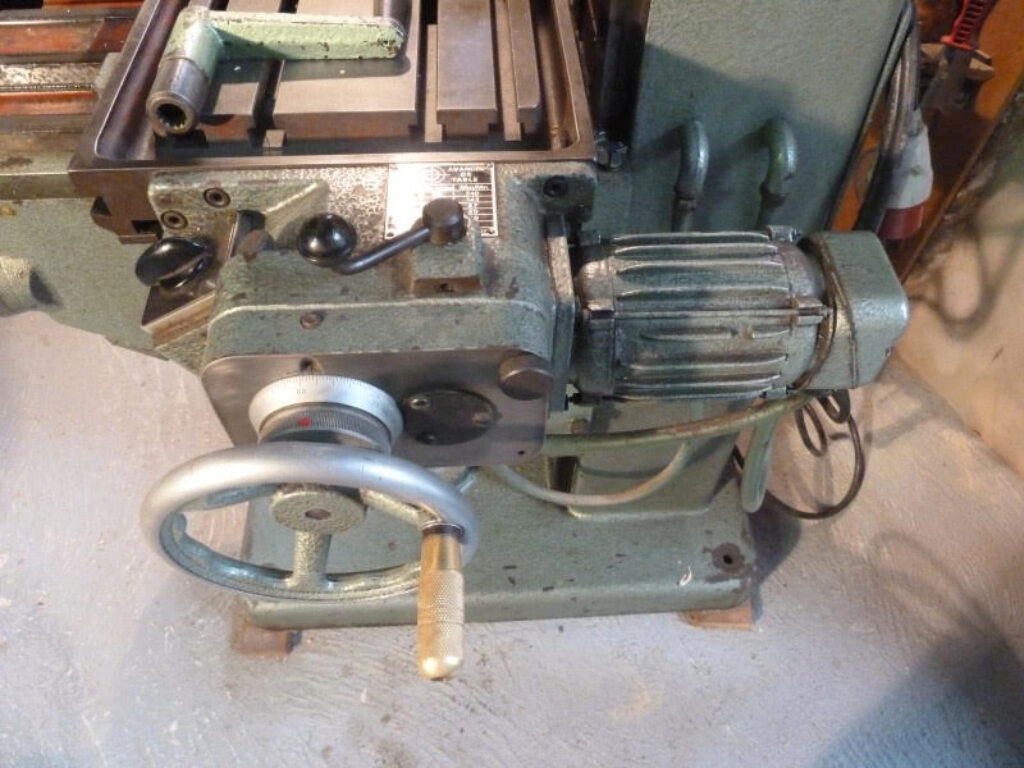 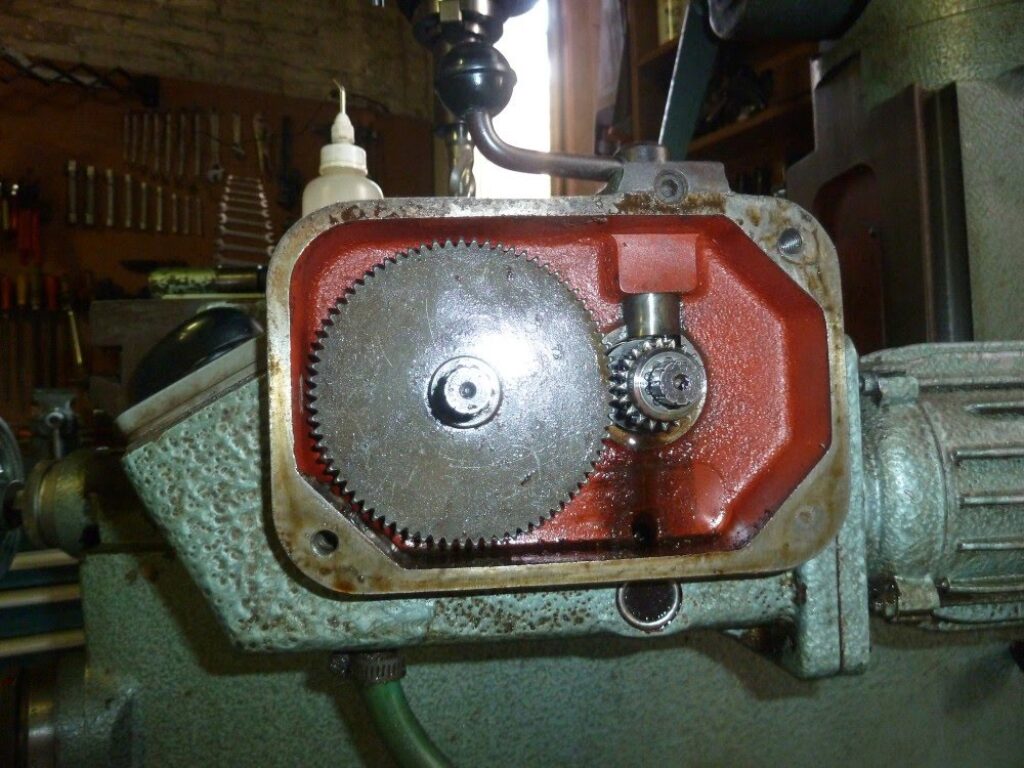 The rotation of the head

The head of the milling machine is built like a giant hinge. This can be seen in the general pictures shown before. This allows the head to be rotated around the “pivot”. In this case, the pivot is a heavy cilinder of about 120mm of diameter perfectly fitted. The inclination can be read in a scale as you can see in the next picture: 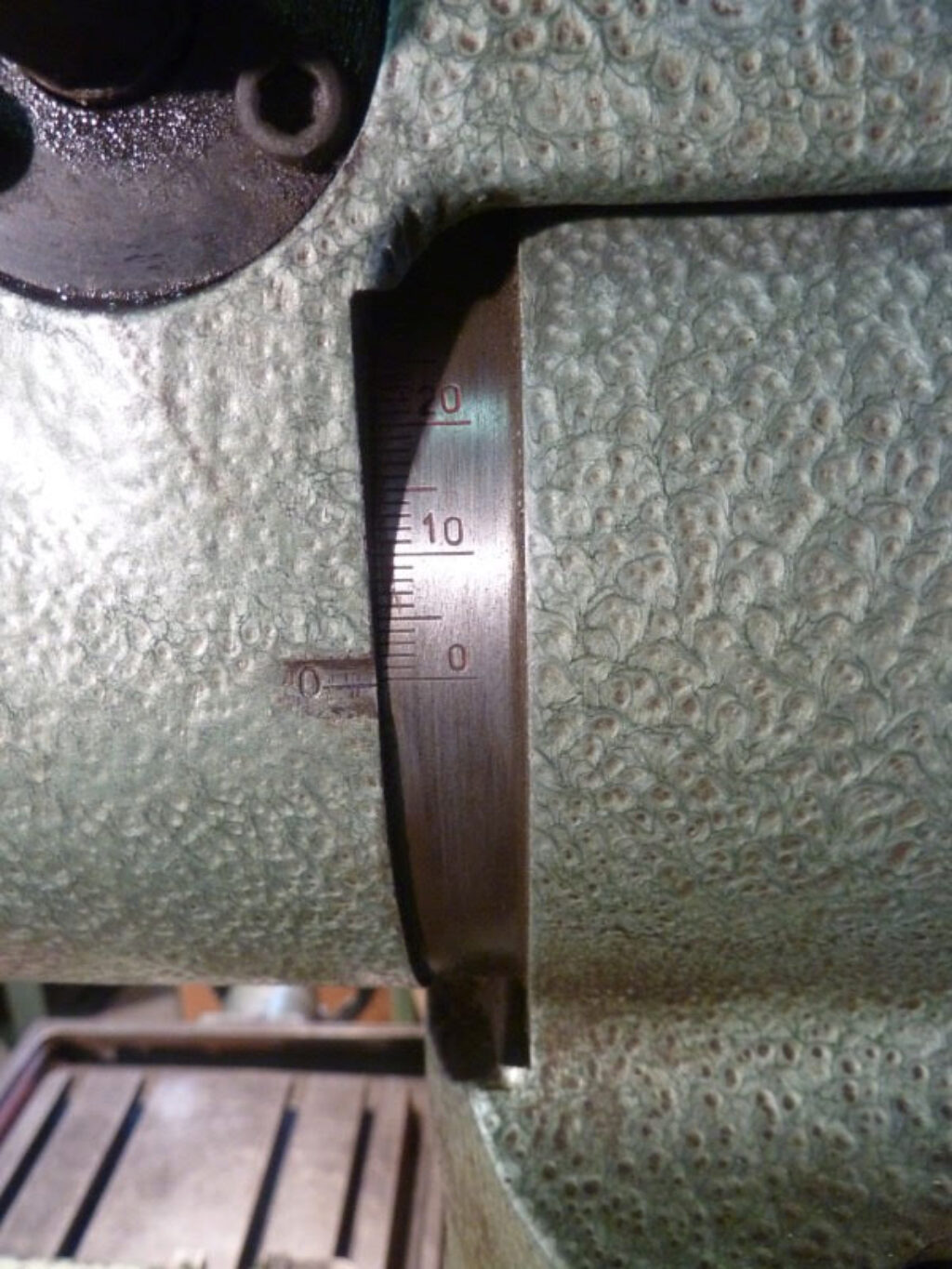 To rotate the head is a heavy work given the weight of it. However, it’s made easy by means of a worm that slowly rotates the head. The worm gear is actuated by a square ended stud in one side of the head. Once rotated, the head can be locked in its position by a couple of clamps that are actuated through square ended studs. The next picture shows the head inclined 30 degrees: 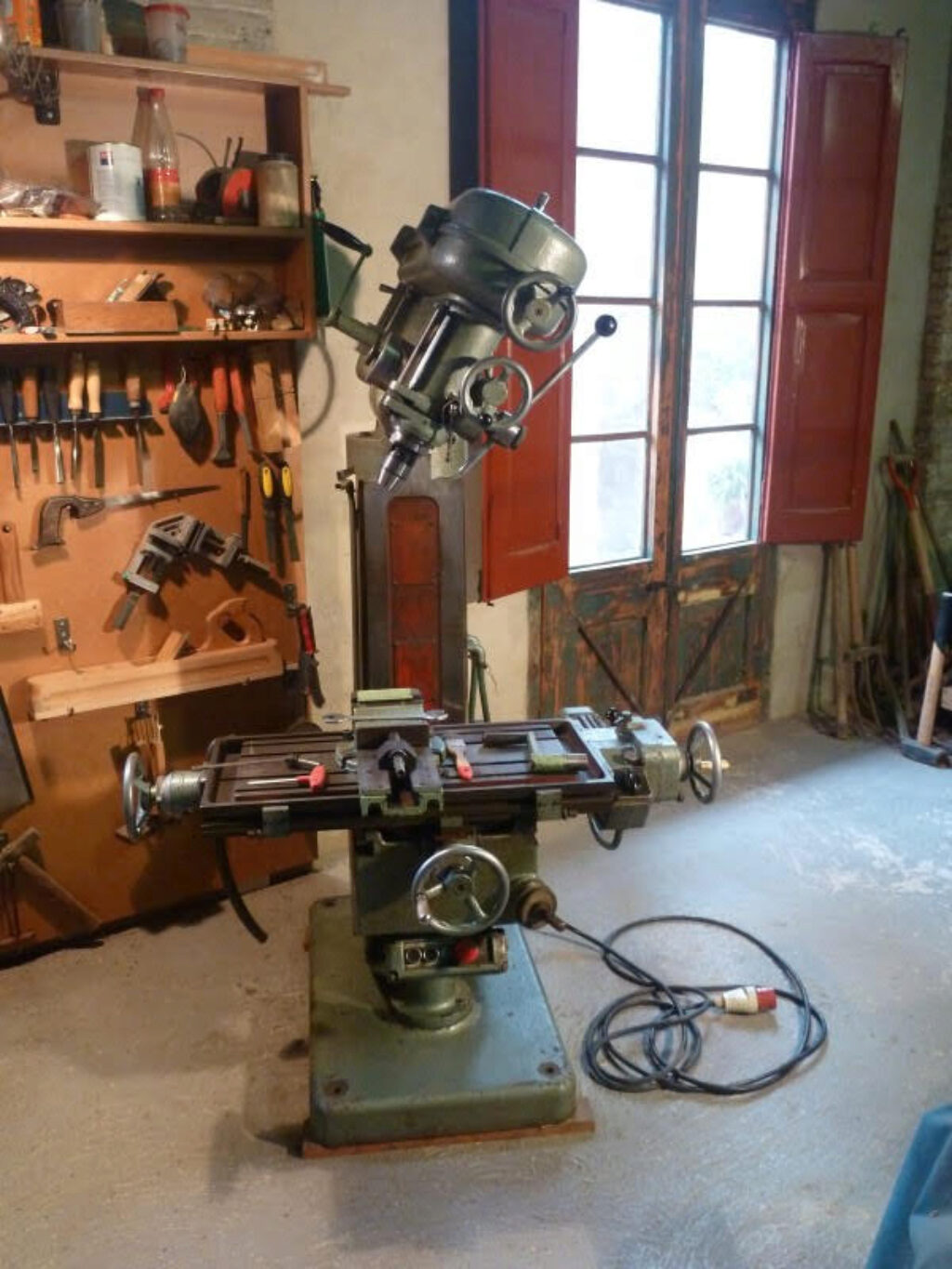 To return the head at the zero position, there is a positioning conical plunger that, when properly set up, gives a perfect vertical position. Obviously, this plunger should extracted before turning the head. This is done by a useful nut that acts as an extractor. The picture below shows this plunger. 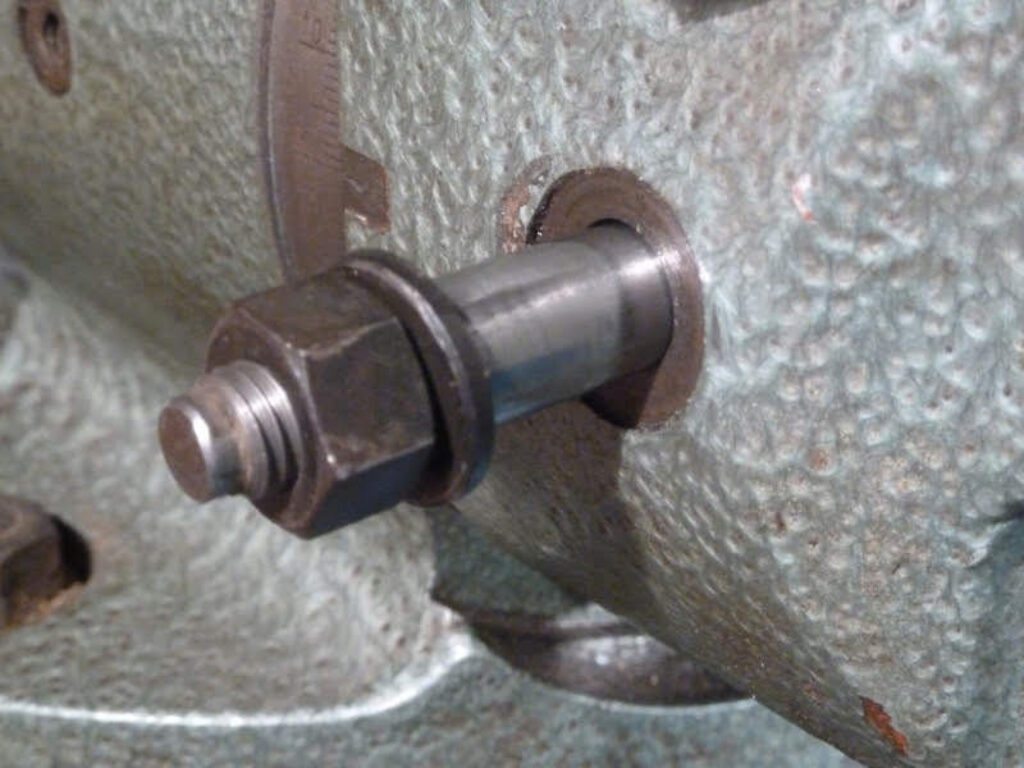 The quill and the spindle

Maybe a year ago I fully serviced the quill and spindle mechanism: I replaced the bearings that support the driving pulley, cleaned and relubed the spindle bearings and readjusted them. What follows are some pictures obtained during this work. 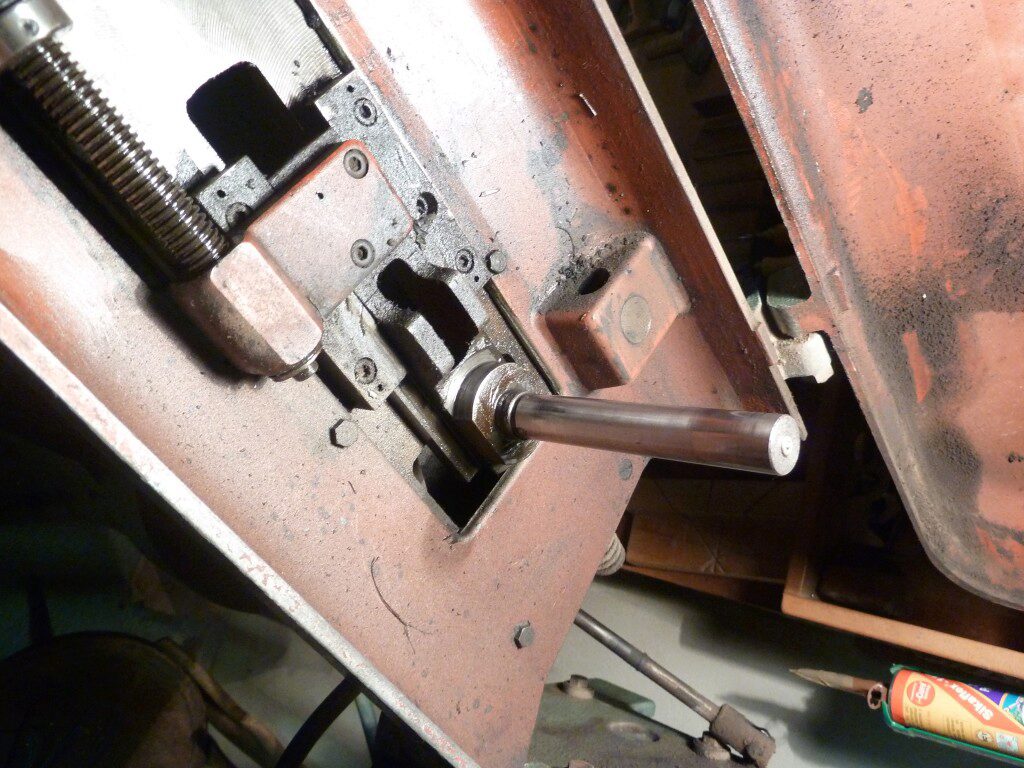 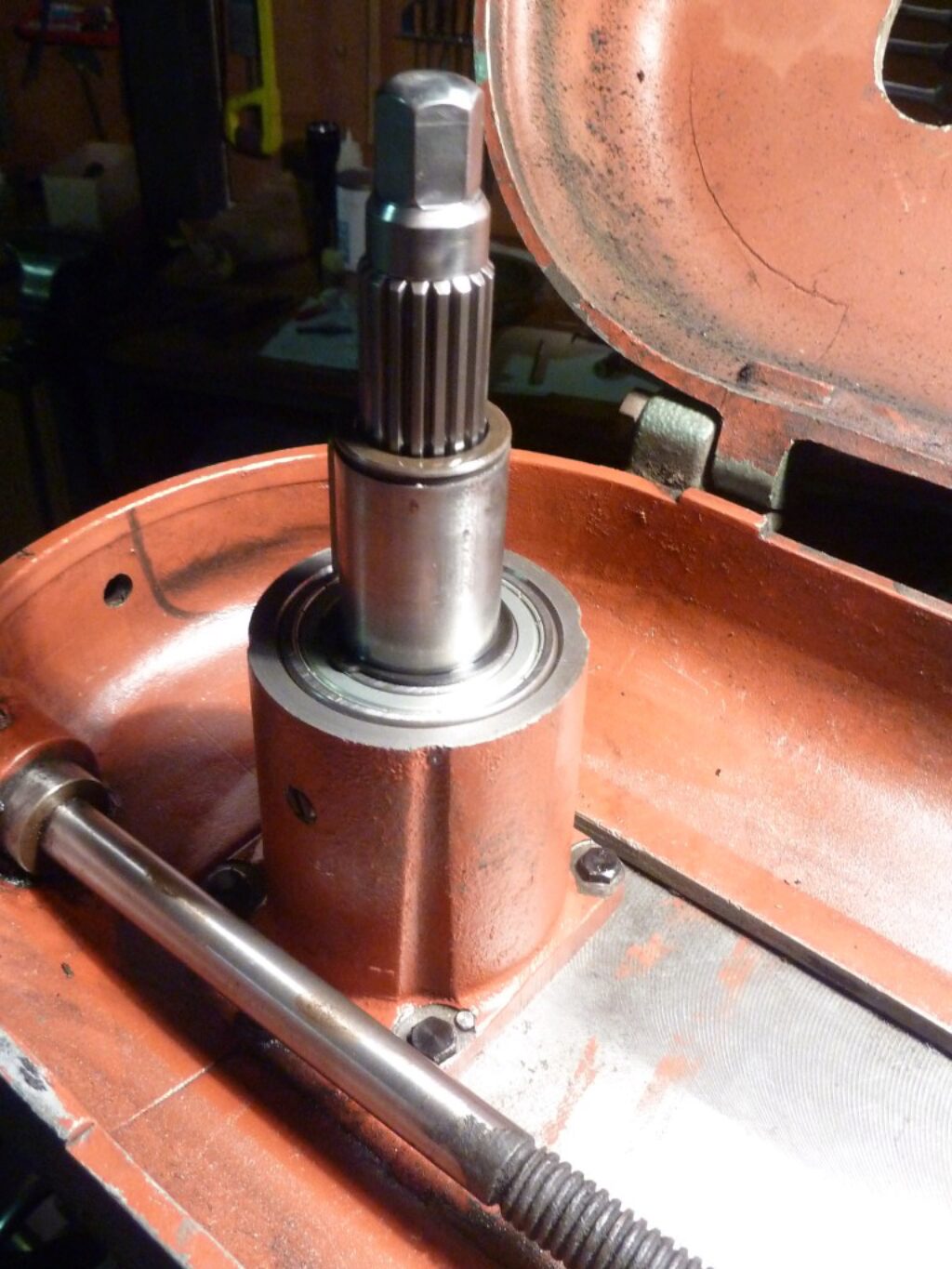 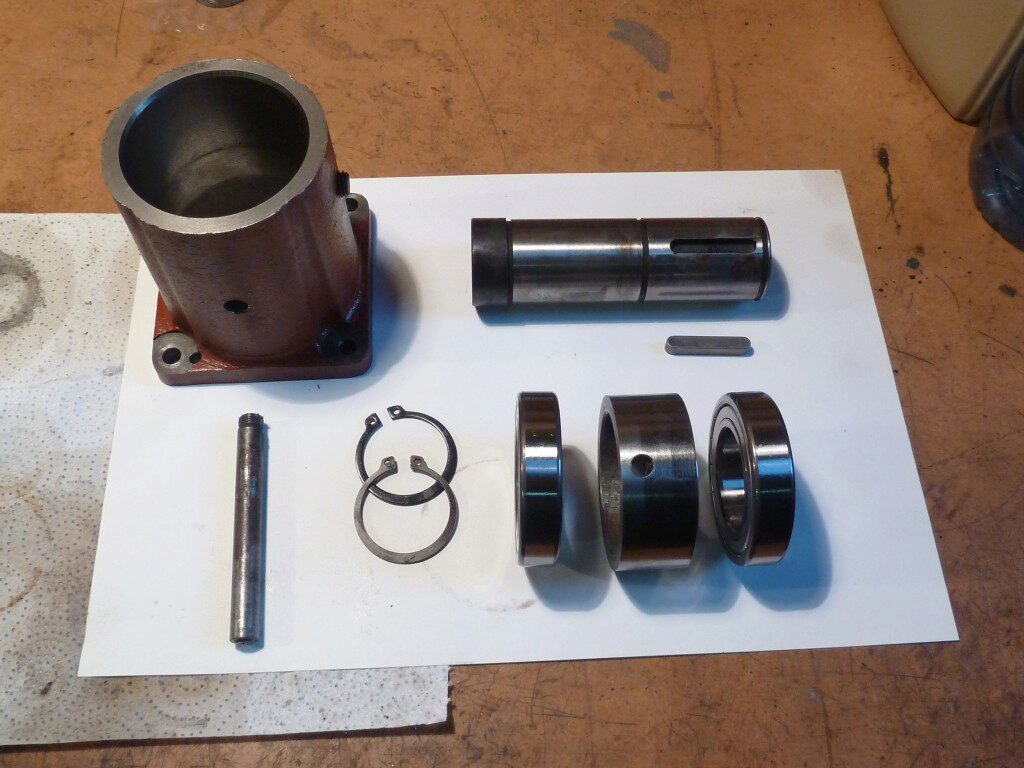 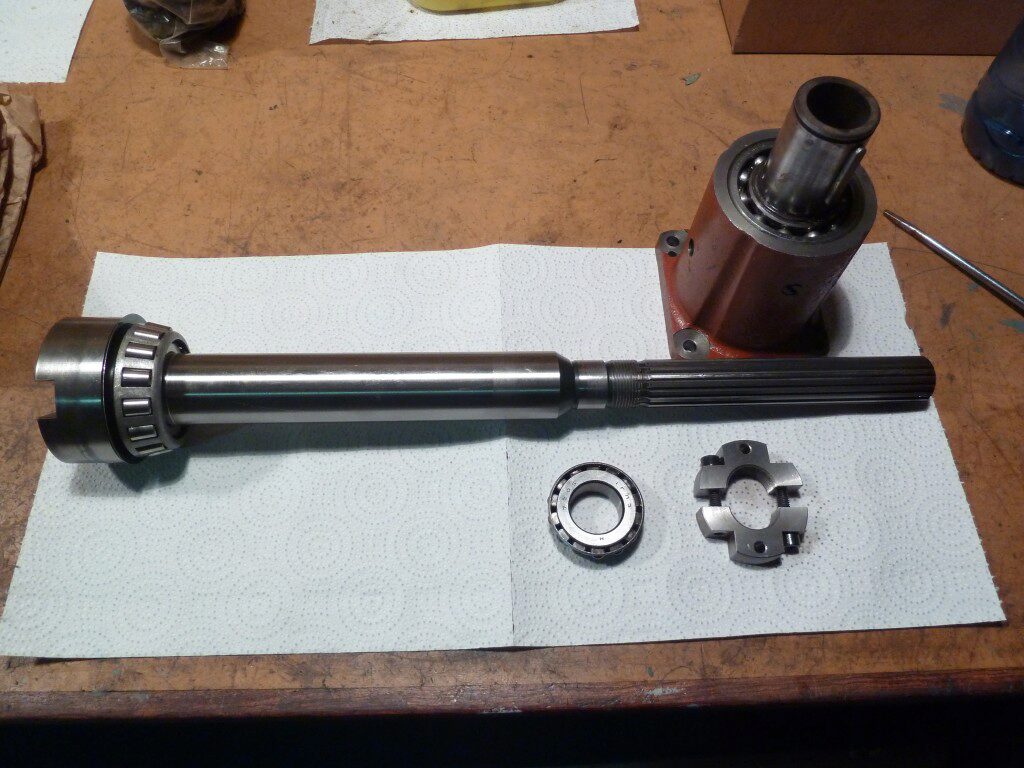 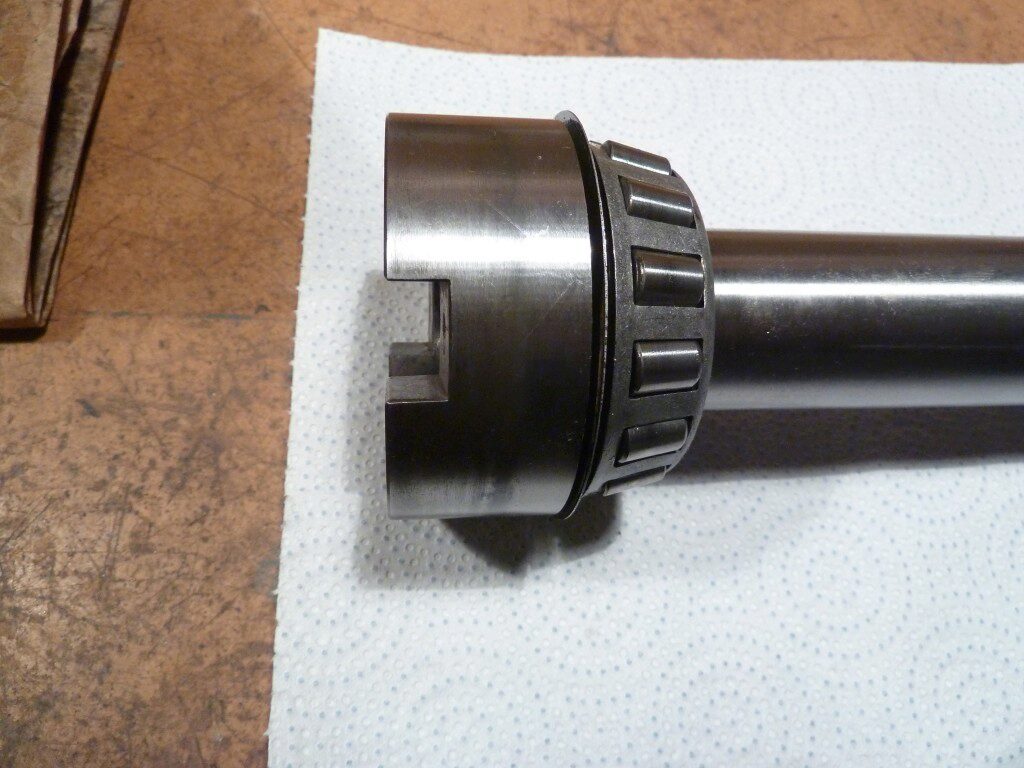 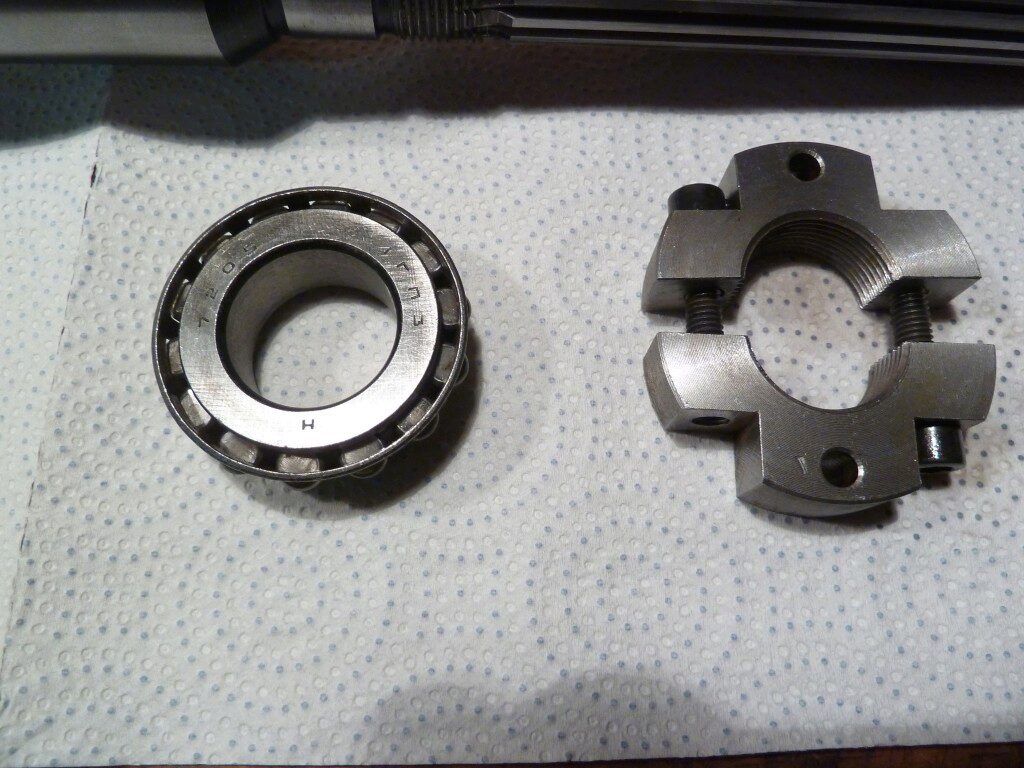 The table at maximum Z travel 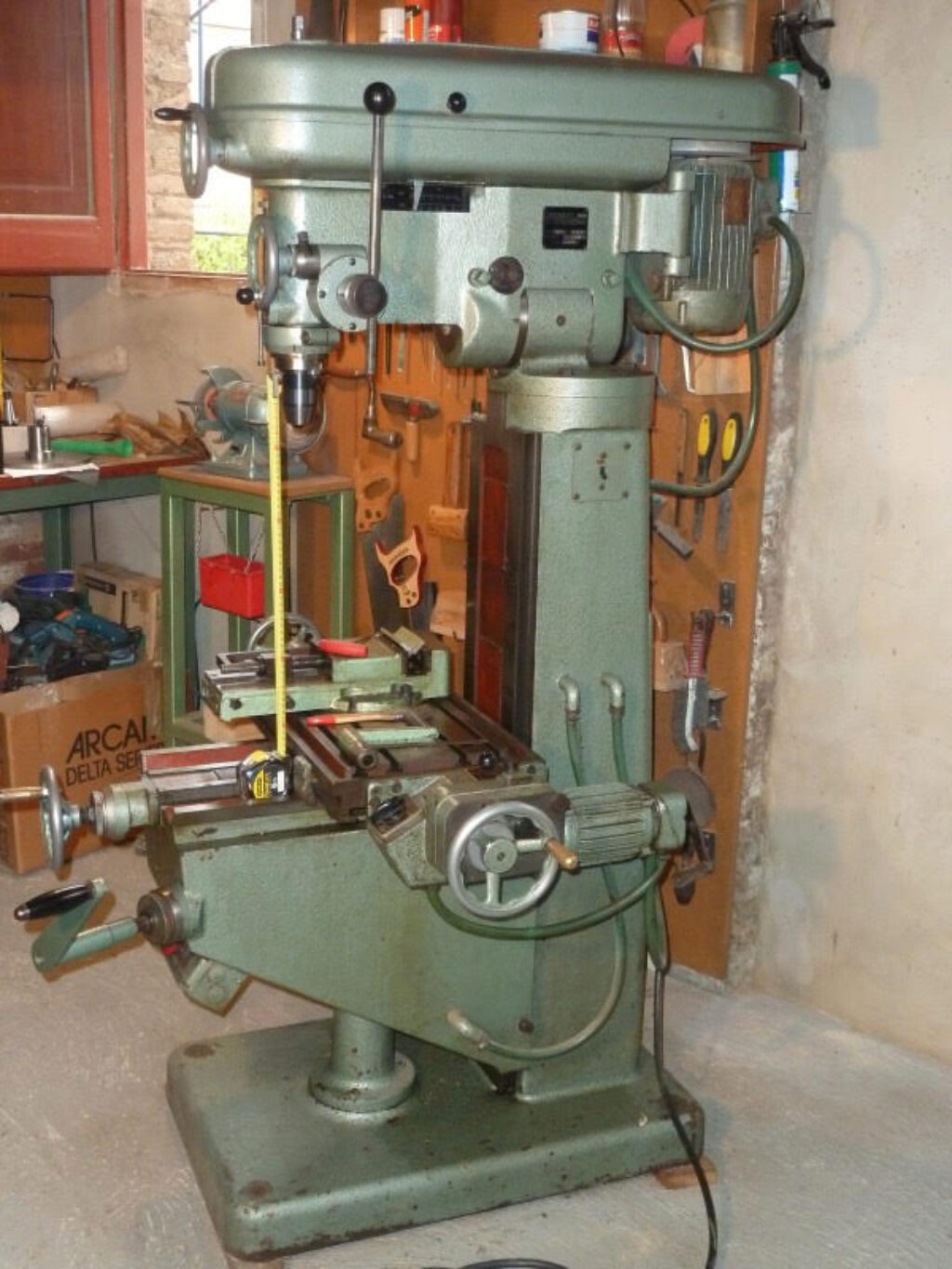 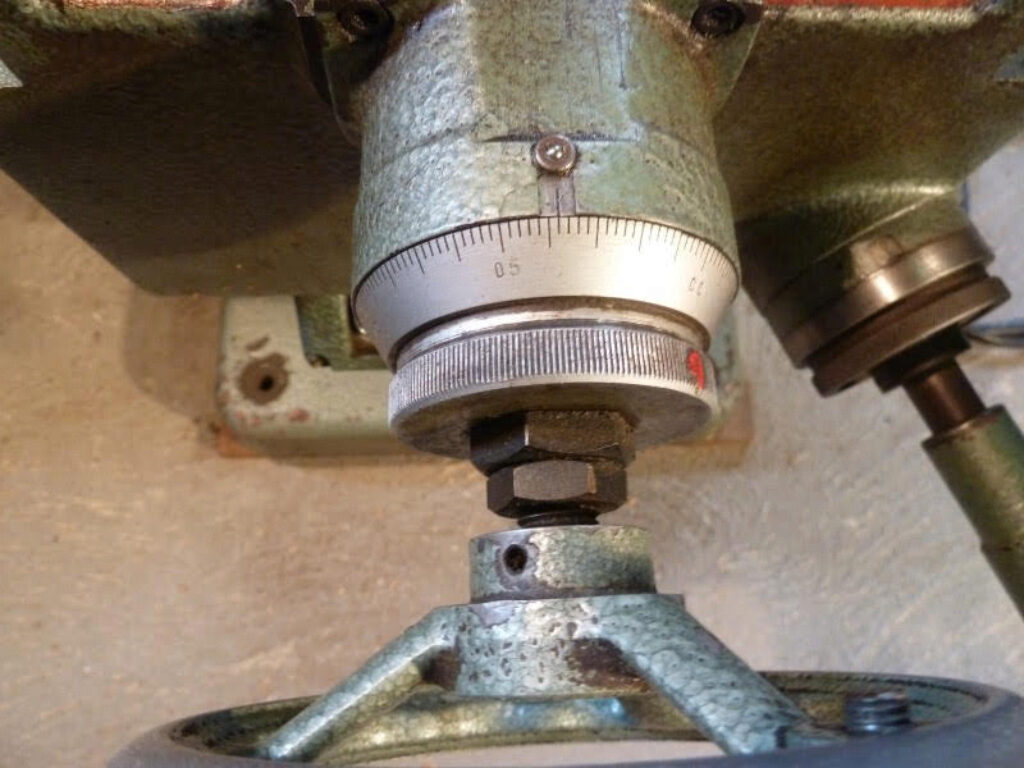 The milling machine leaves the garage 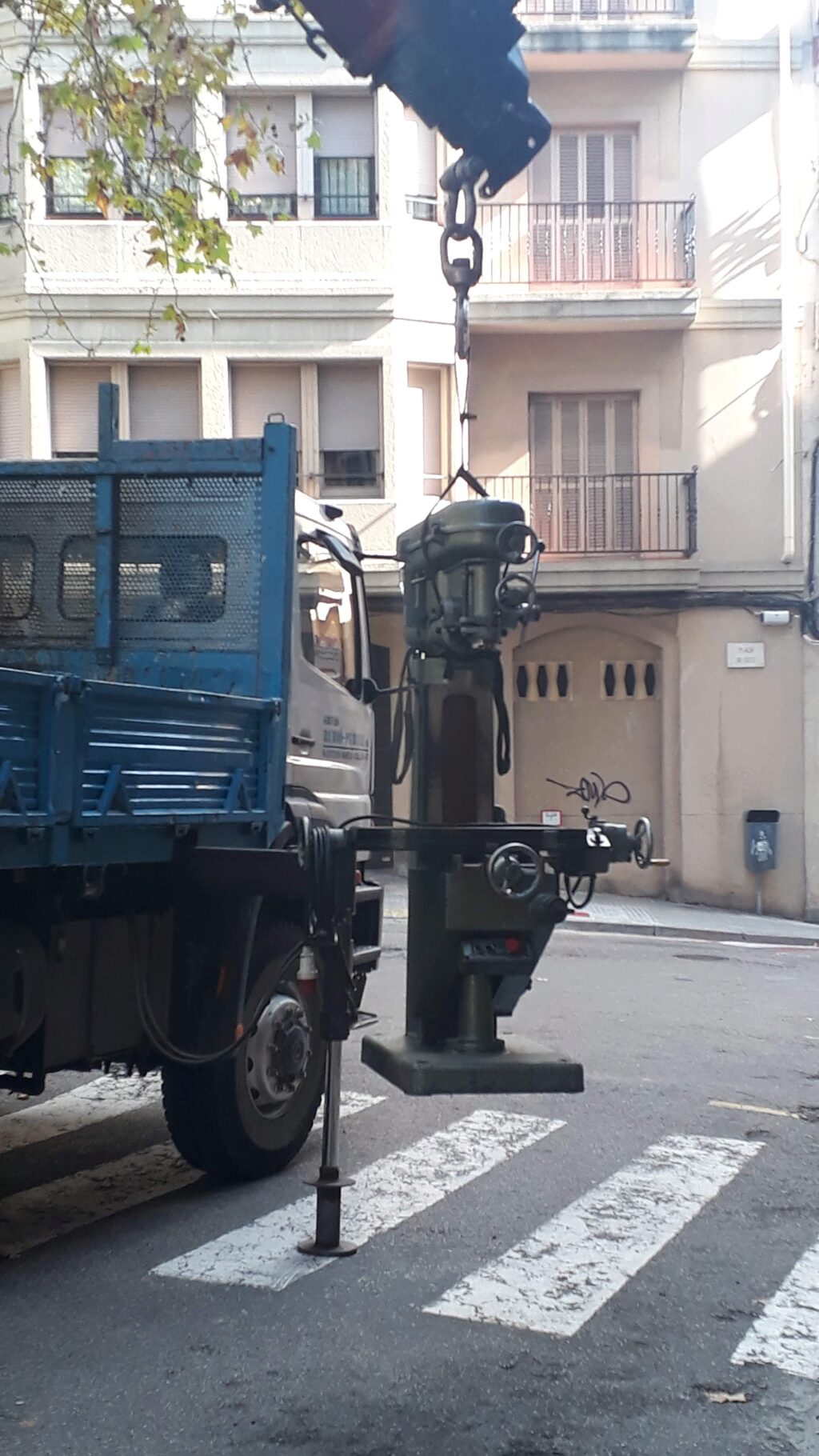 Some videos of the machine running

Drilling a piece of scrap:

Face milling a piece of scrap:

Literature about this milling machine

As said before, I don’t know any literature about this machine other than the brochure shown in the first section. However, there are some manuals of similar machines also built by Cincinnati-Chomienne (later as Cincinnati-Milacron) that share many building blocks withs this one. The most salient are:

Other references to the same machine